What does JawsTec do? Digital Manufacturing. 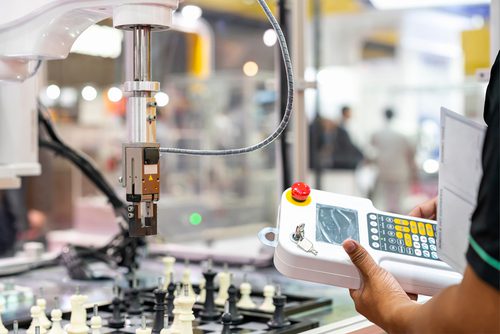 Businesses of the Future

What is Digital Manufacturing?

Although it sounds like a simple concept, digital manufacturing is much more complex than the name implies. To summarize the idea, digital manufacturing is the integration of computers into every aspect of a company’s system. This includes the production, communication, and management areas, as well as other steps in between. The goals of creating a digital workplace are numerous, but all connect to boosting efficiency, productivity, and quality while minimizing cost, errors, and time.

This part of digitalization is all about making computers work on production lines with minimal effort on the humans’ part. The advantages of this concept are vast, including the ability of the computer software to recognize waste in things like materials and time. Upon determining where waste is occurring, the goal would be to program the computer to fix the problem and adjust itself accordingly.

While most communication these days is already digital, manufacturing facilities would take it one step further. It would provide a solution to the occasional miscommunications in businesses worldwide by creating, for example, a single Cloud-like platform to aid in easier communication between management and clients. There could even be solutions where similar businesses would have the ability to collaborate on projects and share information in a more organized fashion. Many of these assets exist already but often aren’t as coordinated as they could be, and, for many businesses, completely digitalizing their communication systems would revolutionize their business models.

The final most useful aspect of digitalizing manufacturing and businesses is in management areas. This would include, for example, analyzing resources to determine the most cost-effective materials, determining optimal processes for time-efficient manufacturing, or realizing where the most waste in materials and time is occurring and eliminating such issues. Additionally, replacing manual systems with digital or automatic procedures would not only help in management situations but also in every area of the business model, ultimately resulting in achieving the highest customer satisfaction possible.

As with any groundbreaking idea, there are a few issues with completely revolutionizing the manufacturing systems and forcing everything to go digital. One such issue is that the computer systems required for this kind of business are expensive and still being tested and developed today. Sometimes businesses cannot afford such systems, especially when the people themselves can take care of much of the same tasks as the computers, even if they are somewhat slower or less efficient.

Another issue arises because many individuals prefer human connection, especially in customer service or other communication circumstances, over having a conversation with a computer. Even if computers nearly eliminate errors, many would argue that the business would lose its “personality” or personal appeal if computers solely ran it. While there isn’t a way to fix that issue, perhaps with time, people will become used to the new method of business and be able to adjust their opinions. Additionally, the benefits of faster production and customer satisfaction may eventually outweigh their aversion to the new procedures.

In summary, there are clearly many pluses to developing an entirely computerized manufacturing facility by utilizing computers in every aspect of the business. Not only would it increase productivity, efficiency, and quality, but it would also minimize errors, turn-around time, and waste. This would result in high customer satisfaction, profits, and success. However, there are a few downsides, including the expense of computers and the lack of personal exchange, which is a drawback for some individuals. In general, we believe that the pros outweigh the cons, so here at JawsTec, we are striving to create a digital business of the future. Already, we integrate data and computers in every step, from design to shipment, ensuring the fastest, highest quality, and most cost-efficient services for our clients.